When we first came to Portugal on August 31st 2020, we had no idea where to go… In fact I had never been there before. I had felt we needed to go and Leo had felt we needed to go to Portugal, and that was it! He had been there once in 2017 for a retreat. So apart from the travel it really was a brief introduction. We had no idea where to go to. So we just followed some campings we found. And if it was not the right area we would move immediately. We ended in Salema on October 23rd. All 4 of us (Gerlof was also with us at that time) loved the village immediately. I wanted to be near the ocean. And this south-west corner felt very good. No signs over C above the roads. Hardly any police. Quiet. And it felt good.

Before we left we had thought we needed to buy land, so people could come if things would get too rough. But nobody came. They all learned to cope with the situation and handle it differently than going away. In fact, I think nobody realises, how different the energy is here. So they all stay where they are, thinking it’s the same everywhere…

We started looking for land immediately. But land with houses are rare AND expensive. Land was still somewhat affordable, However, it was always land where building was not allowed. It is after all the National Park here. Unless there is already a house from before 1950, it’s not possible to build anymore.

So we did not find exactly what we wanted. And also… Were we willing to pay so much money, that would lessen our savings really heavily, only for allowing others to come? Or would we want to live there? The children wanted a house, not a camping site. If it was just us, we might have done that. But we had to think about the children too.

We discovered a lot about Portugal in the first winter and spring. We saw where the government fails in regulations when it comes to protecting fires… ALL decisions are increasing the risk of fire. But it looks like, everyone is trusting what they hear, and it looks like knowledge from the grandparents had already faded… I had started growing food already when we were in Almádena, the first winter. And I had started collecting seed and trying to get them to sprout. I managed with some citrus and a few apple seeds, that were growing into baby trees.

Permaculture is a way of life

Then the day came that we went to Carrascalinho (near Aljezur) for the summer and I decided to follow a Permaculture Course. And everything we learned there was a confirmation that what the government does in Portugal is very very bad for the land. In fact, the south can turn into a desert if it does not get the proper attention. As you drive around it’s obvious that at one point, this whole area was forest. Full with trees… And now, only here and there are packages of trees…

The first winter had been a wet one. Finally since many years. Yet, in April, everything turned brown again. And we were amazed: How is it possible, after all that rain, that the soil is already too dry again? YES, they hardly do any water collecting from the roof… Most rain just goes to the lower point asap… nothing is built to keep the water longer at a place so the soil get’s soaked… It hardly happens here. And if this region gets dryer and dryer, what does prefend that from happening? TREES!

So then I got really excited. And started to collect the seeds from fruits. YES, we were even able to grow melons from the melons we’ve eaten! And from the tangerines, the kumquats, the oranges, the grapefruits, the lemons, I collected seed as well… AND from the apples.. And then I found this article about growing apple trees from apple seeds, that said that you need to keep the seeds in the refrigerator, so it mimics the winter….  I had this little plastic container, put in the apple seeds, every time we ate apple and in apples there’s almost always seed, and then I would put those in the container, I added a wet cotton on top and after 8 weeks it was ready to get out of the fridge and start growing…

The citrus seeds I had in a plastic tray outside the fridge, wet cotton underneath, then seeds, and then another layer of wet cotton. Placed in the sun! And some would sprout many did not. But the once that did, I would put in a former yoghurt container so they could grow.

The apples however were going a lot easier… once the cold period was over, they would start to grow… However, it wasn’t until this last winter, that they started to grow after a week being in the refrigerator!!! They are soooo full of life. Especially the apples we bought at an organic café ‘Andorinha do Mar’ in Figueira, seem to be doing extremely well.

So from the Permaculture farm Pedro in Aljezur, where we went to in the summer, I had received this seedlings tray. And I started to put all the sprouted apple seeds in there. And within another week they would grow above the soil. And within a couple of weeks they would have multiple leafs.

In the meantime we had discovered that we would not buy something in this area. Yes we love this little South-West corner of the Algarve. But there is also something off… And that has to do with ourselves of course. It became obvious in the summer that it wasn’t our dream to start a project here. We also felt we needed to stay another winter here, but then I felt I needed to go again.

However, in this winter I had grown a lot of apple trees… Almost 100!!! I wanted to give people apple trees, so they could plant and take care of it. I just can’t plant them somewhere, because they will not survive the drought of the summer. And in one of the Telegramgroups I was posting about my small apple trees looking for owners. 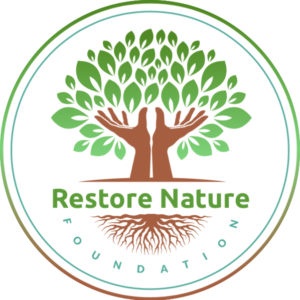 All of a sudden I received a message from a guy named Mattie. He said he has founded the Restore Nature Foundation and is active in this area. Not only at Vinha Velha, but also helping around other projects. I looked up the foundation, I listened to a podcast. Discovered he’s also Dutch. And we think sooooo alike about how we can restore nature! I immediately knew, that all the trees were going to him AND all the other gardenstuff we had bought last year.

He does what I thought I was supposed to do, but now feel that it’s not up to me. How cool is that, that I get to contribute to both our missions just by growing trees from seeds and making the Algarve greener!

Yesterday I put as many baby-trees into plastic containers as possible. It turned out we had 49 trees in buckets. And half of them I have put into a container. Half of them are still too small, or the seeds just had gone into the ground and still needed to come up. But it was a good amount. We had a shovel, a scythe, organic compost, large buckets and shadescreens.

Today is the day of handing them over

This morning, we woke up and it was a druling day when we did our early morning beach walk, but it really was raining later. PERFECT!! The Algarve needs more, even though we love the sun and the sunrise, we know how much this weather is needed. So we drove to Vinha Velha to meet Mattie.

We had been there once before for a meeting about souvereignity that was organised by another group. So we had seen that it is a little community with multiple houses, they have their own café, they sell vegetables from their own garden, eggs from the chickens etc.

It was a very pleasant meeting with Mattie and after we had unloaded everything, he showed us his location for the tree nursery and he told us about his plans. And again I noticed how alike we think about nature, education and how to restore the damage.

He’s a storyteller, connecting people and bringing people together for different projects. He was also involved with the time-bank currency FLORES, that we also have received while helping out a new community and we spend it also recently on someone who could fix the wiring of our car, so the lights, the water and the fridge from the caravan also work while we are travelling. Since we received the van only 1 day before we left The Netherlands we had not been able to test that. We figured, that the wiring was done properly… Anyway, drifting off the subject…

However, the time bank is a form of currency. Where 1 hour results into 1 FLORES. You can even go to a yoga or tai chi class with it, or receive a message, get something baked, advice about a specific topic. We really like the idea of FLORES. We hardly spent any, in the end not knowing what to do with it. And so we have some left. We will also donate that to Mattie, because he can use it for paying help for his projects.

All in all I’m really pleased that we are not leaving Portugal without having contributed. Of course, with our Soup for Our Soul Family Evenings we have already connected many people. Giving them also a warm meal, some physical contact through a hug – because we know some really need that, connecting people so they know who else is in the area and what they do. Etcetera. And now we also leave a lot of potential trees behind that hopefully find a good spot, so they will fruit in 8-10 years.

Apple trees from seeds take longer before they fruit. And the seed from one apple kind, does not automatically result in a tree from the same kind (more info here). So what kind of trees they will turn out, I have no idea. I know that they are all apple seeds from apples from Portugal. One of the things that Portugal is doing really well is labelling food that is ‘Original Portugal’. And we also know that buying their own products is helping Portugal financially as well… Not only by shopping in a supermarket, but it goes way back to the producer/grower.

I received a tray back, because I want to continue growing trees while travelling. So we can plant out trees in regions where enough rain is falling throughout the summer as well. That way, we also give back to Mother Earth, by making sure more oxygen is brought back, even though we are driving around.

if you’d like to help also in the Reforesting or Restore Nature projects, check out the Restore Nature Foundation and if you are in the area, ask if you can help out. Mattie is also hosting events, like Fridays for Nature, working together on a project, only until 1PM… Check https://restorenaturefoundation.org/news-events/ and donations are also welcomed: https://restorenaturefoundation.org/pricing/